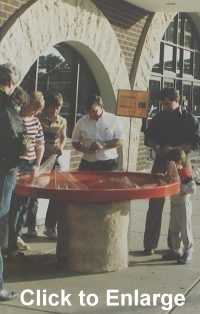 This page shows some pictures of past models and improvements over the years, with our newest model shown at the bottom.

As described on the patent page, our first custom prototype model was a five-foot diameter version in 1985 (top left). It had clear acrylic launch ramps and a carpet-covered round base. With a few production differences, this is the model that has been preferred by museums, zoos, and shopping malls.

We have included pictures in the "Compare" section below of various versions of this design with accompanying descriptions of some of the disadvantages that have been overcome with our new patented models.

Our Three Foot diameter models are the most popular size since they fit into the available floor space of stores and restaurants, so there are lots more of them throughout the world. Two-Footers are primarily placed in fast-food restaurants and other small floor-space locations.

Our new proprietary design with the ramps mounted OUTSIDE the circumference allows the coins to roll on the ENTIRE surface of the funnel without having to be launched on a path so they miss the ramp on the opposite side like all the older models. It is like getting a much larger Well in the same amount of floor space as the older models.

To help illustrate the significant benefits of this new innovation, notice the "effective diameter" of an old 5' diameter Well in this video where the launch ramps were mounted ON THE SURFACE of the funnel, thereby reducing the spinning surface to about 3 feet.

Now compare that with our new 3-Footer Well in the next video with the launch ramps OUTSIDE the perimeter so the entire funnel surface is used for spinning. Now you get the same coin-spinning show with a 3-Footer which is less than half the overall foot-print size and cost...both very important factors. The coins actually roll longer in the new 3' than in the old 5'. Said another way, the new patented design of the Three-Footers puts on the same coin-spinning show of the old Five-Footers, at a much lower cost and floor space.

Of course, our Seven-Footer is even more spectacular and includes EIGHT COIN LAUNCH RAMPS mounted outside the funnel! So 8 people can play at a time which attracts a lot more money, and the coins use the entire funnel surface for a lot bigger show with more revolutions. All this, and the footprint is no larger than the old model five-footers.

How is that possible? Because the ramp-mounting surfaces are in the "corners" of the Seven-Footer, they do not increase the side-to-side width of the Well. Said another way, when we place the funnel into a box, the ramp-mounting surfaces occupy the otherwise unused "corners" which means they do not increase the foot print floor width, or the dimensional shipping rates!

The result of all the features of our new Seven-Footers is that they will generate more money in the first year than our old models, or any copies, over and above their cost!

Click here to review our patents if you haven't already seen them. This page also compares features, performance, and income to some of the unauthorized copies that have come and gone over the years.

Over the years, unauthorized copies have popped up from time to time. They have all had in common the old original style where two ramps are mounted INSIDE the perimeter of the funnel as you can see in this five-footer picture of our first Well.

We don't want you to get caught up in the middle of any controversy or action that might come from getting one of these unauthorized copies. But in addition to the patent rights, we are proud that our Wells are the very best in workmanship, performance, and income generation. 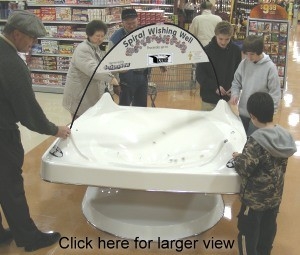 Not only are the new designs more professional and durable than past models, they are also more profitable! This is especially true with the Seven-Footer compared to all past variations of the Five-Footers. In fact, we offer a guarantee to the hundreds of museums and zoos around the world who have the old 5-foot models: Even though your existing 5-footer is already paid for, you will raise more money in the first year with a new Seven-Footer, over and above its cost!

Therefore, if you are thinking of getting a large Well for the first time, even if you could get one of the old designs free, it wouldn't raise as much money as the new Seven-Footer, over and above its cost, in the first year alone! And of course, nothing compares to the durability of molded-in launch ramps and the professional automotive-quality of our Wells. So it is an investment you can be proud of, and confident that it will generate the most money possible for your fund raising needs.

Looked at another way, if you have a good location for a Well, you want to maximize its return. That location is the "gold mine". You don't want to go after the gold with an old pick and shovel when you can do it with a modern giant machine. Similarly, we don't think it makes any sense to place an old funnel that will generate far less income, even if it costs less initially. Your goal is to get as much out of that floor space as possible...to get as many people as possible to empty their purses and pockets. Clearly, it is easier to do that when 8 people can play at a time...not only generating more income, but generating more attention which draws more people over to see what the excitement is all about.

As the company that invented fund raising coin funnels, it has been our privilege to participate in helping charities, organizations, and stores raise funds all over the world. We are very proud of our innovative designs, quality, service, timing, and communication.